Last time, we looked at schemes for scoring sets.  Each scheme has its own advantages and disadvantages.  Putting these schemes side-by-side will enable us to identify those qualities and how they can serve our core engagement.

It is important to understand first that these schemes tend to change character as the size of the sets increase.  Schemes which award the highest points for large sets frequently award the low points for small sets.

If players in your game only collect small sets of widgets–four or five at most–these are the numbers you’ll need to look at.  Today’s column centers on small set scoring.

If players in your game can collect small sets–sets of ten, twenty or more–you’ll need to look at those instead.  Our next column centers on larger set scoring.

Designers must know when to obey the algorithm and when to diverge. Mathematical purists will notice that I’ve taken a particular liberty with two of these formulas. This was done to maintain standard scoring conventions.

An exponential doubling scheme that values a collection containing only single widget at 1 point would value an empty collection at ½ point.

Similarly, a strict Fibonacci series would value the an empty set of widgets and a set containing only a single widget both at 1 point.

Awarding points to empty sets is counterintuitive for most players. Furthermore, players should sense progress at every gain.  I therefore adjusted the numbers of these schemes so that sets with no widgets would score 0 points in all cases.

Here is a diagram comparing the value of the scoring schemes at low quantities of widgets.  For the linear scheme, I’ve valued each widget at 3 points each.  For the exponential scheme, I’ve chosen a doubling scheme. 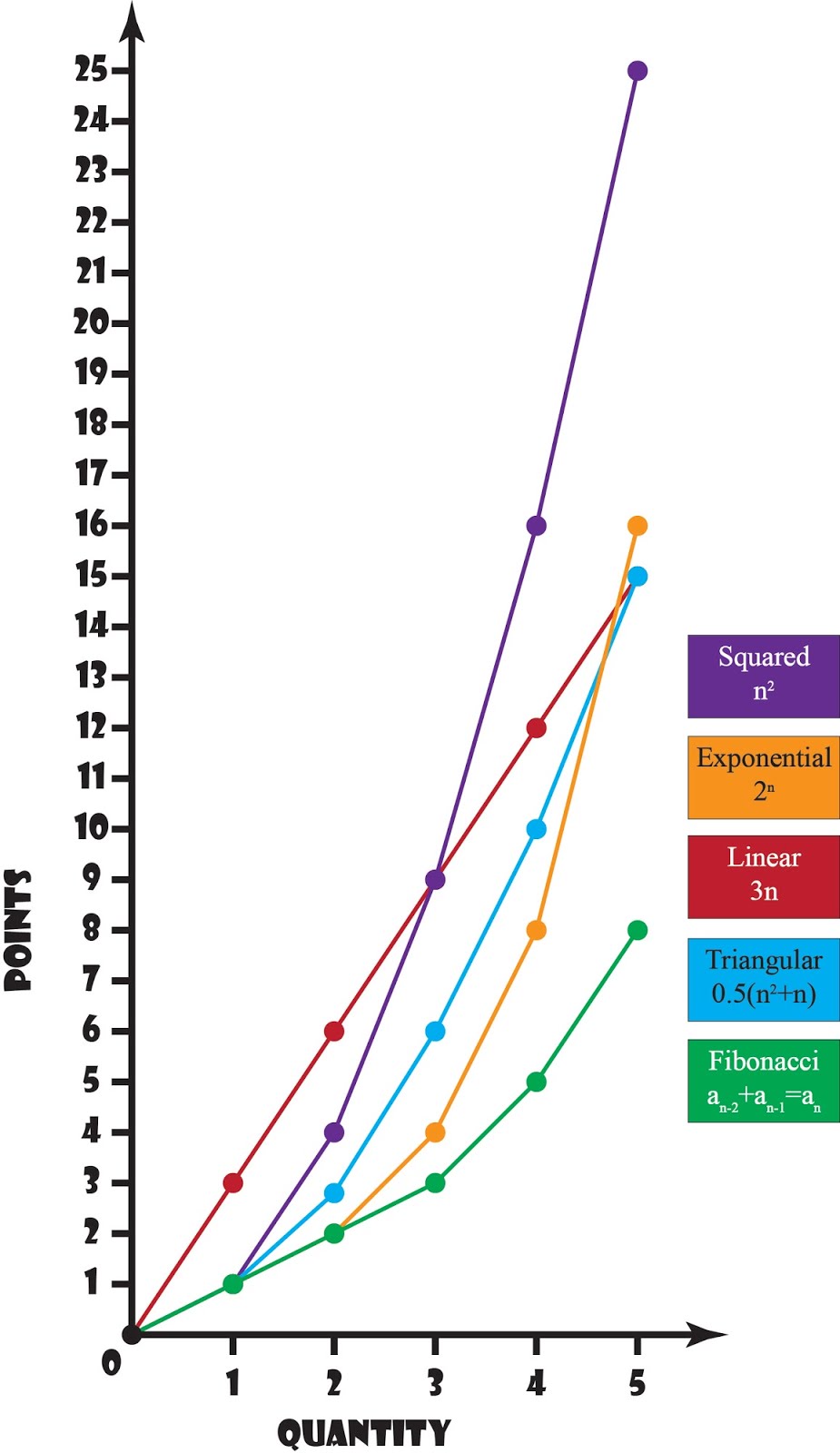 This graph lets us quickly see several facts and consider their application:

A) Nonlinear schemes all start out below the linear scheme. Most catch up with or exceed it by the time the player has 5 widgets in her set.  Because each widget is worth the same as every other widget, the linear approach works best in games that make each widget no more difficult to acquire than the one before it.

B) The squaring scheme is the most explosive in the short run.  It matches the linear scheme at 3 widgets and is roughly twice as valuable as any other scheme by 5 widgets.  Because of this explosive quality, squaring schemes should be kept to games that also make it very challenging to get large sets.

C) Exponential scores are only slightly smaller than triangular scores in the short run.  If you have chosen one of these two and it isn’t quite working, consider replacing it with the other.

D) Fibonacci scoring is the slowest in the short run.  It drops behind at 3 widgets and never catches up.  This turns out to be an ideal scheme for games that have steady difficulty. The importance of gaining each new widget increases while the challenge remains steady creates excitement and competition as any game proceeds.  Fibonacci scoring increases relatively slowly; this enables you as the designer to build that player engagement while keeping scores under control.

Among all schemes, I have a particular fondness for exponential doubling.  Notice that at low quantities, it is the slowest of the growth models but it overtakes the others over time.  This delayed explosion has always intrigued me. This approach is particularly effective if the game has been designed to make each widget increasingly more difficult to acquire than the one before it.

How about you?  What is your favorite scoring scheme in the short run and why?  Please share with your fellow designers by adding it to the comments below.  And if you’re enjoying what you’re reading, subscribe to this blog.  It makes a big difference.

In four days days we compare these schemes again, this time with larger sets.  See you Tuesday!