Last time, we compared the schemes at scoring small sets.  Each scheme has its own advantages and disadvantages and comparing them enabled us to identify those qualities and how they can serve our core engagement.  Today, we move on to larger sets.

It is important to keep in mind that these schemes tend to change character as the size of the sets increase.  Schemes which awarded the least points for small sets frequently award the high points for large sets.

If players in your game only collect small sets of widgets–four or five at most–these are the numbers you’ll need to look at.  Our last column centered on small set scoring.

If players in your game can collect larger sets–sets of ten or more–you’ll need to look at those instead.  This column centers on larger set scoring.

Here is our diagram for larger quantities of widgets. 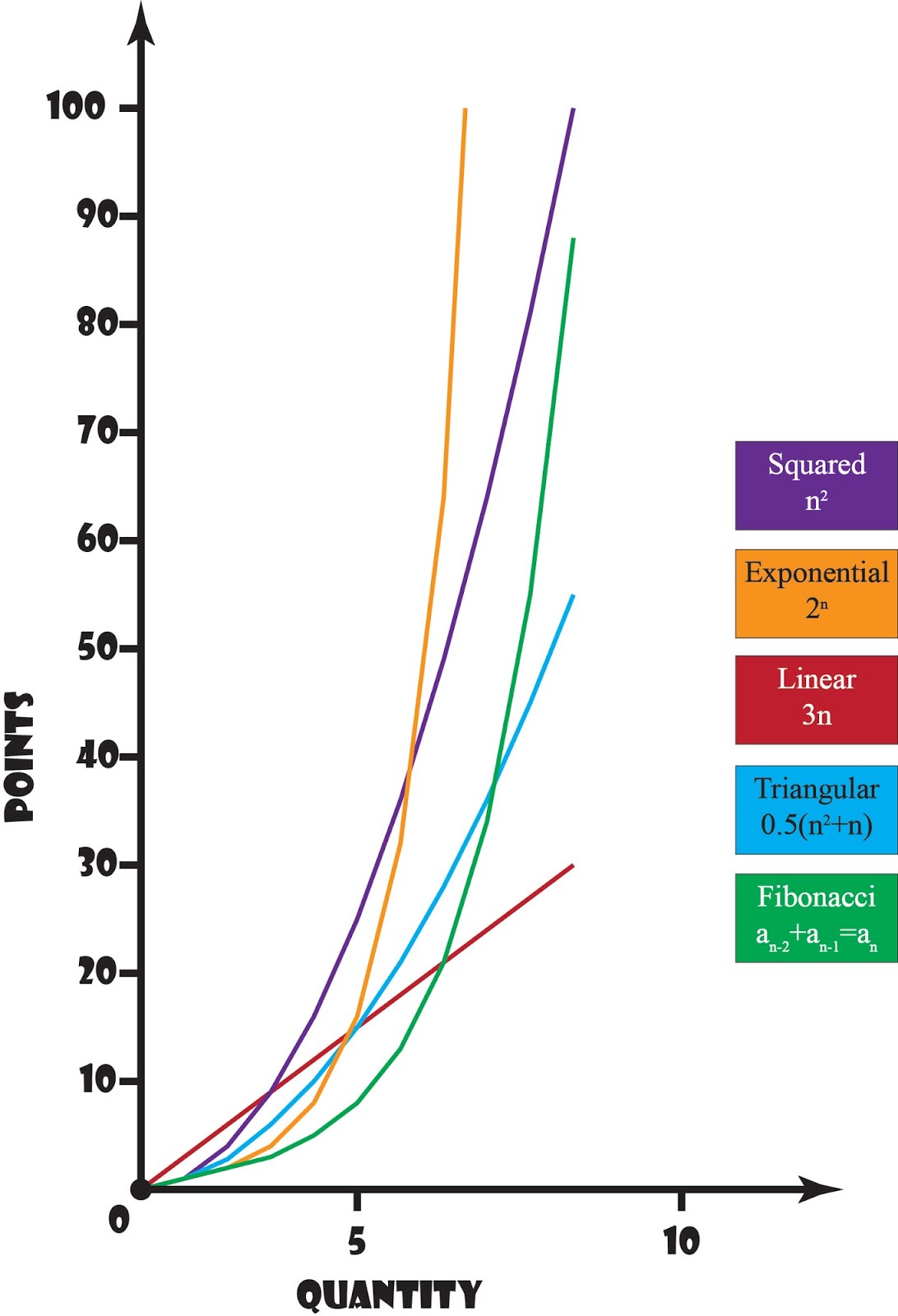 This graph reveals several new facts and again lets us consider their application:

A) All nonlinear exceed the linear scheme when sets get larger.  Mixing one of each into the same game can present your players with an engaging question.  Is it wiser to collect as many 3-point widgets as possible or is it wiser to concentrate on collecting doodads which score triangularly?  Doodads are worth more in the long run but will the game last long enough to give a return?  These are the kinds of questions that keep player attention right where it belongs–on your game.

B) The exponential scheme is the most explosive in the long run.  Like the squaring scheme, it should be kept to games that also make it very challenging to get large sets.

A Final Word on Scoring

Always invest the extra energy to give players a scoring chart rather than asking them to calculate point values from a formula.  This is generally true no matter what scoring scheme you decide on.  Linear schemes can frequently get away with skipping a chart but the others cannot.

Providing a chart allows players to focus their mental energies on in-game decisions which is where that energy belongs.  Stopping to do calculations which could have been set beforehand breaks flow and can pull players out of the experience.

This series on scoring mechanisms was created to put a variety of tools into your toolbox.  Now go put those tools to use!  Then come back and share your experiences with your fellow designers through the comments below.  And if you’re enjoying what you’re reading, subscribe to this blog.  It makes a big difference.

Come back in four days for a my first review of a game design book.  It was the first one I ever read and still holds a proud place on my shelf.  See you Friday!