Last column related buddy Walter Hunt’s assertion that some games are essential to every gamer’s education.  While he takes the position a bit more strongly than I, he does also have something of a point.  Playing off of his assertion, I put forward Advanced Civilization as a landmark game.  Some of you wrote in with your own lists of landmark games.  It was reassuring to see how many were also on my list and simultaneously exciting to see how many hadn’t occurred to me.

Or maybe Walter and I are full of beans.  Several readers called me out for holding Advanced Civilization above so many other worthy titles.  Some readers asserted that its play time outstays its welcome on the table.  Some stated that the end is anticlimactic.  Some stated that playing its descendants is sufficient to appreciate its contributions.  The goal of every post on this blog is to encourage debate and so I thank each of you for challenging my views and for taking the debate further.

The brilliant PBS Idea Channel expounded recently on the nature of nostalgia with the claim “you name it; someone thinks that the thing that came before it was better.”  And they’re right.  I would like to believe that it is altruism which leads me to write this series on landmark games. It may however be this particular flavor of nostalgia instead.

Whether speaking from my desire to educate or from my nostalgia, I do feel that certain games demand to be played.  Some are exalted because they are pivotal ludographic ancestors many others.  Others, because they changed the game market.  Today, we take a look at…

Turn Mr. Peabody’s WABAC machine to the year 1984.  That year reminds me of three things–a certain George Orwell book, a certain Van Halen album and a certain game by Abbott, Haney, Haney and Werner.  I spent many hours of that high school junior year playing Trivial Pursuit. We played it with friends.  We played it with family.  We bought over 20 million units that year.  For the rest of our lives, we would value trivia in a way no previous generation ever had.

Apart from astounding sales figures, what makes Trivial Pursuit a landmark game?  What can it teach us about modern game design?

Let’s start with the scoring track.  Trivial Pursuit folded its scoring track into the pawns.  Each time you collect a color, you gain that wedge and put it into your pawn. It would be great to see more games implement this idea.

Trivial Pursuit also did an incredible job of tuning in to its target market.  Ray Winninger points out in his essay for Family Games: The 100 Best that Trivial Pursuit questions appear to have been written backwards. The answers are rarely unusual or unheard of. It is the facts about them which are unusual.  Players can take the answers along in their heads and drop them in casual conversation.   Take as an example, the last question from this sample card.  Although you may not be a culinary expert, encountering this question today empowers you tomorrow to drop that Vichyssoise is a creamy leek and potato soup served cold the next time you’re surrounded by foodies.

Writing its questions backwards allows players to leave the game table feeling as if they’ve achieved something more than winning or losing.  It leaves its players with a sense of accomplishment and a sense of success, even after a loss.  No wonder it took the market by storm! 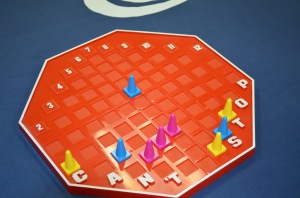 We hear regularly that modern game design is characterized by always giving every player an opportunity to win right to the end.  Trivial Pursuit achieved this as well.  Like SId Sackson’s amazing classic Can’t Stop (column coming soon), it is always theoretically possible to win the game in a single turn.  I actually came quite close to this feat myself once, while playing the Star Wars edition of Trivial Pursuit.  Because it is always possible–even if unlikely–to win in any turn, players are constantly motivated to stay engaged in the game.  Even casual players who have fallen behind know they still have a chance, that a good run of questions could bring an upset win.  This is a feature I truly wish more party games emphasized.

What are the landmark games?  Which titles should every game enthusiast play at least once?  Trivial Pursuit is my second suggestion.  Return Friday to see what you think of the third.

Have you played Trivial Pursuit?  What do you think of it as a landmark game?  What other games do you see as notable ancestors to newer games?  Which ones were the (ha-ha) game changers? Share with your fellow readers in the comments below.  And if you’re enjoying what you’re reading, create and account with WordPress and follow this blog.  If you keep reading, I’ll keep writing.

One thought on “Landmark Games, Part 2”