We have identified eight categories of trigger so far–Entrance, Tap/Untap, Exit, Acquisition, Revelation, Damage to the Card, Damage by the Card, Critical Mass.  I also pointed out that any of these effects could use the opponent as the trigger rather than the card holder.

We have addressed five categories of effect so far–Victory Points, Currency, Endurance, Cards, and Additional Cardplay.

I also challenged readers to identify any triggers I missed and to predict what other effects I would list.

Reader Jayson took on my challenge to identify missing triggers, suggesting four AND a modifier.  Jayson’s triggers were

(a)  “Play immediately when this card is drawn…”

(b)  “When you are forced to discard this card…”

There are all interesting triggers and each certainly has its place in design.  I find (b) particularly interesting and have been mulling that one over quite a bit since reading Jayson’s comment.

Jayson went on to point out that many triggers could be modified in the negative case “If X does not…” which may be seen as a special case of the Critical Mass trigger discussed in the last column but is certainly worth keeping in mind nonetheless.

Triggered card effects fit under the “when TRIGGER occurs, do EVENT” umbrella.  We have addressed five categories of effect so far.  Today’s blog expands our list to include game component effects and internal effects.

Obviously, card effects can be used heavily in card games.  But cardplay mechanisms can also be used as part of a larger game.  This opens up a world of card effect opportunities for the intrepid designer to explore.

Glittercats correctly anticipated this area with the comment “A lot of games use card effects to control non-card mechanics. So the card’s effect may be to move tokens on the board, or re-roll dice, or some other interaction with non-card components.”  Let’s take a closer look at the options this gives us. 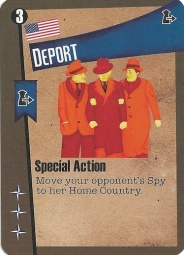 “…place a control marker in your weakest area.”

“…remove 2 voters from the most populated area.”

“…you may move all of your workers from the defeated area.”

Card effects in a  board game could direct us to alter the components themselves.  These effects might say things like

“…advance the toxicity marker one level.”

“…you may immediately reroll one of your dice.”

“…flip a die over to its opposite face.”

Similar to component condition, our effects could change the overall state of the game.  We could achieve this by altering the topology of the game board, exhausting areas, refreshing areas, or even changing the odds.  These effects might look like

“…add a map tile from the supply.”

“…remove a depleted mine from the board.” 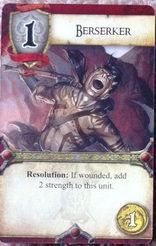 Up to now, we’re focused entirely on outwardly-directed effects.  But what about triggered effects which target the card itself?  This ground has been well-trod by constructed deck games but what about applying these effects to other types of games?  These effects could have our players

“…remove a timing stone from this card.”

“…remove all enemies from this card.”

These were my other categories in the “when TRIGGER occurs, do EVENT” formula.  Next time, we begin combining triggers with events.  Which which games use which combinations best?  Come by Friday and find out!

What effects did I leave out?  If so, what were they?  What game trigger do you find most interesting?  What made you like it so much?  What game triggers do you dislike?  What keeps it from being more enjoyable?   Share with your fellow readers in the comments below.  And if you’re enjoying what you’re reading, create an account with WordPress and follow this blog.  You keep reading. I’ll keep writing.