Design partner Luther Bell Hendricks V, development phenom John Eyster, and I had the pleasure of attending Gen Con 2014 last week. While that delightful annual roller coaster deposited most folks back into their normal lives gently, like the babbling stream at the foot of a waterfall, it was merely one of the loops in the roller coaster of August for us teachers.

My classroom is now prepped, I’m settled in and ready for those smiling faces to arrive Monday and that means it’s time to get back to the important business of blogging!

Guardians of the Galaxy 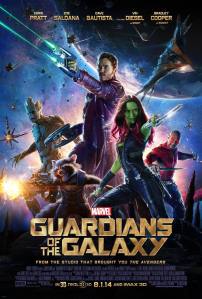 A few days before departing for Gen Con, three of us checked out Marvel’s newest blockbuster. Chris Pratt was a familiar face from Parks & Recreation, the Guardians were familiar from their comic appearances in the 1970s and 80s, I’d noticed at my FLGS that Marvel rebooted them in comic form (presumably to build anticipation for the film) and wondered how they’d do on the big screen.

Folks, this was worth it.  Action? Yes.  Adventure? Yes.  Space Opera? Yup.  Is it perfect? Hardly. Lee Pace was wasted on that glowering cardboard cutout of a villain.  It is worth your time to see? Definitely.  Were I of a mind to develop alternate characters for Sentinel Tactics, these Guardians are be the ones I’d do.

My Work at Gen Con

Our main purpose at Gen Con was to promote Sentinel Tactics and it’s thrilling to say that it was well received.  Our central objective has always been to give players a new way to interact with the 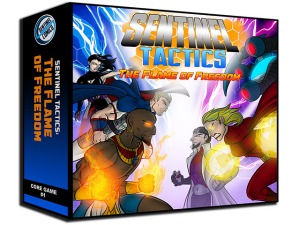 Sentinels setting and it looks like we succeeded.  While the game may not have the broad appeal of some other titles *cough* X-Wing *cough* its core audience was thrilled.  Some players delighted at the opportunity to play a villain.  Some appreciated a chance to scratch their wargaming itch with Sentinels-playing friends.  One was so enthusiastic that he posted a strategy guide for the scenario we’d been running!

Christopher Badell and I had a chance to sit down with W. Eric Martin of BGG for a Geek Speak about Sentinel Tactics and I promise to add a link here just as soon as it’s up.  If you haven’t had a chance to get a good look at the components yet, this will be a good way to do it.

In addition to Sentinel Tactics, APE Games released their Rolling Freight Expansion #1.  This expansion offers a new power into the Rolling Freight system and three new map features.  It’s fans seemed quite happy with it and I’m doubly eager to see the response to Expansion #2 (scheduled for next year) which offers two more maps, this time streamlined for two players.

Kevin Brusky (Mr. APE Games) and I had an opportunity to speak with The Spiel (link tba) and I promise to add a link here just as soon as it’s up.  We elected to reveal another game I’m developing for APE during that interview.  the working title is “Muster & Battle” and I’ll be blogging about it here soon.

On another happy front, we took several meetings with publishers in the evenings and have come away with some exciting new projects.  I’m not free to discuss them publicly *yet* but details will be coming soon, I promise.

Other Excitements at Gen Con

Every year, I pour through the convention previews and assemble a “must look at” list.  This year turned out to be an exceptionally good year for conversions to the “must buy” list.  I can’t offer any complete reviews here but will mention a few of the stars and why I liked them.

HABA is easily one of my favorite game companies.  They make solid kid-friendly games that still feature intelligent, meaningful choices.  It was a major delight to see HABA USA decide to have a booth at Gen Con.  When I dropped by, the staff was delightfully cheerful and busy.  Lea Culliton tells me that not only will they be back next year, they will likely double their booth size.

Haba had several new games on display and I elected to bring home a copy of Plucky Pilots for its press-your-luck mechanism and general sense of whimsy.

The Asmodee booth had several good games on offer but after a short demo with codesigners Bruno Cathala and Charles Chevallier, it was clear that Abyss offered an economic model and gameplay which made it the one to grab.

Always clever at pulling money from my pocket,  IB&C debuted Dragon Slayer, a dice game at a price I could not refuse.

It was in 2009 that Z-Man Games first released a Pocket Battles game.  In my ignorance, it wasn’t until 2013 that I tried one of them out and discovered what a little gem I’d been missing.  Fortunately for me, they put the original three back into print alongside the newest entry in the series, Confederacy vs. Union.  The pocket battles series is a perfect example of what I’ve tried to accomplish in my own game designs–a place for both strategic and tactical decisions, clear rules, fast play.

Did you make it to any conventions this summer?  Which ones?  What was your favorite game?  Who was the most interesting person you met?  Share with your fellow readers in the comments below.  And if you’re enjoying what you’re reading, create an account with WordPress and follow this blog.  You keep reading. I’ll keep writing.