Enjoying some free evening time, I was browsing the shelves in the BGG.Con game library.  I’d heard that the new Street Fighter deckbuilding game was pretty good and wanted to check it out.  Deckbuilding is an intriguing mechanism to me and a decent one is always worth a look. 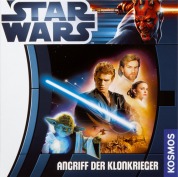 We never found Street Fighter but something else did catch my eye–Star Wars: Angriff der Klonkrieger.  Licensed property games have, at best, a mixed reputation.  Curiosity demanded we pull it down and take a look regardless.  And what do we see?  This Attack of the Clones tie-in is focused on the Geonosis battle from the climax of Episode II.  Hasbro/Milton Bradley’s deeply disappointing Star Wars: Jedi Unleashed was also set in that battle.  Might this game be better?

But wait–this tie-in was design by Inka Brand and Markus Brand–these are the minds behind A Castle for All Seasons and La Boca.  Why this tie-in could actually be good.  Four of us found a free table and took it out for a spin.

And I can happily report that Star Wars: Angriff der Klonkrieger is a decent cooperative game.  More importantly, it features elements game designers should be studying.  What follows is less a game review and more an analysis through the lens of a designer.

Like most cooperative games, Star Wars: Angriff der Klonkrieger gives players a large number of ways to lose but only one way to win.  Keep from losing for five full rounds of play in order to win.  At first glance, the number of ways to lose seemed overwhelming.  As designers, we should make our game’s objectives transparent to our players.  Even though we were able to completely understand them by the end of the first round, I would have liked this element to be clearer. 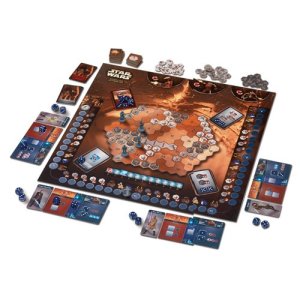 In the narrative of this game, the end of the fifth round is the arrival of reinforcements and we jedi are struggling to hold out through wave after wave of enemies until those reinforcements arrive.  The game includes a plastic shuttle which is used as a round counter.  This is a nice touch to begin with–making the figurative notion of counting rounds into the literal by showing the shuttle approaching is already a good idea.  Brian Yu’s Lemony Snicket’s A Series of Unfortunate Events: The Perilous Parlor Game similarly used Poe approaching the front door as a game timer.

The round track in Star Wars: Angriff der Klonkrieger goes further than just round counting, however.  The shuttle’s path includes a space for each step within each round.  Carrying out a round then becomes straightforward: resolve a step, move to the next space and resolve that step.  This implementation does an estimable job of keeping players focused on the game board and spares them trips to the rulebook.  More designers and publishers should be pouncing on this approach.

Jedi in this game are essentially invulnerable.  Many Star Wars tie-ins take this approach.  Apparently, physical injury is far too mundane for the knights of the old republic.  In addition, jedi are nearly omnipresent.  Nearly.  Each jedi can travel an unlimited distance to attack enemy troops but only through empty spaces.  Thus, instead of being defeated, jedi can be surrounded by troops and thereby pinned.

Enemies swarm the board in one region at a time.  These regions are drawn from a bag of tiles.  There’s nothing particularly unusual about this but the graphic design is again well-executed.  Each tile shows both the region’s number and an image of the game map with the area in question shaded.  Quick and clean.

The most unusual element of  this game is its die allocation mechanism. Each player gets a set of dice to roll and allocate to their play mat or to special challenges surrounding the board.  However, these dice are rolled one at a time.  Each player rolls and places a die before any players move on to roll their next die.  This element forces players to make tough decisions, sometimes committing to a course of action early in a round, sometimes deciding to completely ignore one threat to ensure their odds against another.

While the die allocation mechanism does generate good tension, it has a shortcoming. Like many cooperative games, Star Wars: Angriff der Klonkrieger lends itself to quarterbacking.  One bossy player could easily steamroller the others at the table and generally run the game.  I haven’t yet tried to design a cooperative game but it’s my belief that the best solution to quarterbacking is including a traitor.  Since this game is strictly cooperative, no such stopgap exists.  The players at our table were generally collaborative so we didn’t encounter this issue but I could certainly see where a different group could have a painfully autocratic experience.

All in all, I’m glad we decided to take Star Wars: Angriff der Klonkrieger for a spin.  Should you acquire it?  Is it an essential game for every designer’s collection?  Probably not.  But you should definitely seek it out and give it a play. 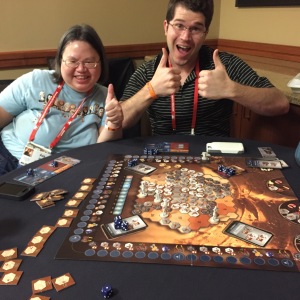 What do you think of the mechanisms in Star Wars: Angriff der Klonkrieger?  Have you seen these elements in any other games?  Which ones?  Which used them better?  Why? Share with your fellow readers in the comments below.  And if you’re enjoying what you’re reading, create an account with WordPress and follow this blog.  If you keep reading, I’ll keep writing.

4 thoughts on “Star Wars: the Eurogame”