The Story So Far

Luther and I were recently approached to design a boardgame to enhance an existing RPG product line.  This project got me started thinking about cross-platform game design.

This series concludes today with conversions between board games and roleplaying games.

Roleplaying Games and Their Connection to Legacy Games

RPGs share a striking connection with their tabletop brethren; RPGs are the original Legacy games.

“Legacy games” according to Boardgamegeek “are board games that change over time based on the outcome of each game and the various choices made by players. … The changes made in a Legacy game are always permanent, so what is done can not be undone.”

In an RPG, the actions your character takes have similarly lasting effects on the game world.   Your character–and therefore your starting position in the game–changes regularly each time you play the game.

If your character saves a town from a dragon, your character has earned a lasting reputation in that game.  If your character fails to prevent the assassination of the star emperor, that character is dead in every future session of that game.  Knights of the Dinner Table is one of the great gamer comics, centered on the the ongoing chaos of the eponymous group and their beleaguered DM.  Throughout the comic, we see the game world this group plays evolving in response to their actions.  When Knuckles the Thief–of the Knights–murdered a beggar, he was sentenced having his leg hacked off at the knee.  Another lasting (if not permanent) effect on the game. 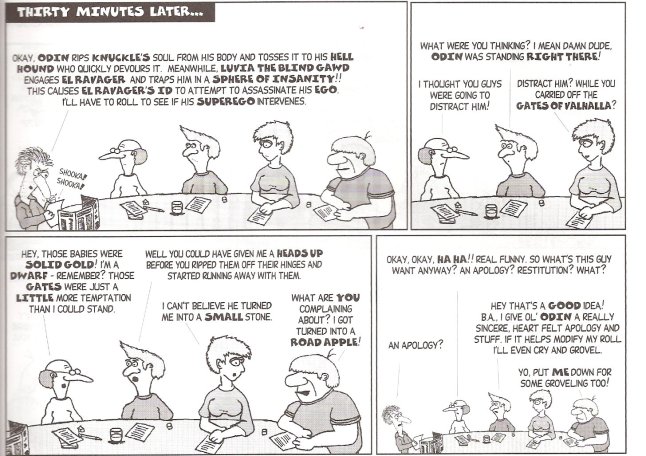 When you design a conversion between board game and roleplaying game, consider ways to include legacy in the game.

Converting a Roleplaying Game Into a Board Game

Converting in this direction might require zooming out to let each player control a group of characters.  Lords of Waterdeep takes this approach by having players control both a lord and his agents rather than a single character in D&D.

RPG to boardgame conversion cold also be a lateral move as in the Pathfinder Adventure Card Game which keeps players focused on a single character just as in its parent game.

Manage the perspective of your game to make a successful boardgame conversion of a roleplaying game.

Consider using your game to expose players to their game world in a new way.  Zoom out to condense epic sequences to a scale players can take in.  Embed players in a world in motion to give them a broader perspective than they could ever get by playing as a single character.

Or keep the scale personal but cast them as villains rather than the heroes.  Or change their perspective again by casting them not as the heroes who rescue the town but instead as town elders who must recruit heroes.

Boardgames are also good at moving sequences from the RPG’s metaspace into literal space.  Imagine a cyberpunk RPG which includes rules for hacking a company’s datafortress.  The rules of the RPG might have the player make a sequence of skill checks and have the referee use these results to arbitrate the hack.  Your board game might replace these simple skill checks with elaborated card play and introduce a game board to represent the company’s network map.  Your game has taken metaspace–a few die rolls simulating the hack–and made it literal–getting the hacker’s pawn to the key data packet and back out undetected.

Converting a Board Game Into a Roleplaying Game

There aren’t many conversion from board game to roleplaying but one stole many hours which might have spent better outside in the sun. The 1997 title Sid Meier’s Magic: the Gathering shows us many ways this game expanded on its tabletop source material.  The game casts you as a planeswalker–the metagame identity of every player in the M:tG card game–with a starting deck of game cards.  Game world terrain comes in five types, representing the five colors of magic in the game.  Cities in the game world also appear in these colors.  Monsters in the game come from monsters in the card game and each monster’s deck will be built around that monster’s color.  Battle is handled by playing of the card game.  Your life total begins lower than the 20 you may be accustomed to, but rises as your character levels up.  Battles are played for ante–a random card is drawn from each deck, set aside, and the winner keeps both cards.  As you gain levels and build increasingly stronger decks, you can take on stronger monsters until finally defeating the game’s boss for victory.  The game certainly had a number of shortcomings and wasn’t loved by most fans but still gives a look into how we might convert a board game into a roleplaying game.

Since there aren’t many examples of roleplaying games based on board games, I’m going create one.  Stop by next time to see which game I would choose and how I would approach it.

Choose wisely and give your players a great gaming experience.

What do you think of boardgame: roleplaying game conversions?  Did I miss any features?  Have you written any yourself?  How did you approach it?  Share with your fellow readers in the comments below.  And if you’re enjoying what you’re reading, create an account with WordPress and follow this blog.  If you keep reading, I’ll keep writing.