A popular game design topic is adaptation.  What is the best way to create a game about an existing property.  The game design threads on BoardGameGeek and pretty much every major thread on the Board Game Designer’s Forum have posts on this topic.

I intend to write a full series covering adaptations soon.  Until then, here is one case study.  It follows the creation of the Schlock Mercenary board game from start to finish.

Hotel rooms at gaming conventions are purely utilitarian.  They are storage units with beds.  A place to stash your latest purchases. A place for a shower. A place to catch a bit of sleep between games. Comfort and leisure simply don’t enter into it.  And since less money spent there equals more money for games, it’s common to share a room.

Walter Hunt and I were splitting the bills at a convention in April 2008 when he asked that innocent question, “Are you familiar with the web comic Schlock Mercenary?”

I wasn’t.  Walter was introducing me to Howard Tayler’s rich universe, starring a broad cast of amusing sociopaths and villains only marginally more disagreeable.  Adventure! Humor! Epic space adventure told three panels at a time.  I was hooked and knew this would be a great setting for a game.

Howard was also open to the idea of a tie-in for his comic.  Two months of research into his comic along with extensive note-taking and Howard received a preliminary proposal for Schlock Mercenary: The Board Game.  The design was underway.

The next year was spent playtesting, developing and polishing that game.  It was a huge sweeping epic of a game.  Schlock Mercenary: The Board Game spanned all the events of the first book Schlock Mercenary: The Tub of Happiness. Future expansions would tie to each book in the series while the core game focused on Tagon’s Toughs at its beginning. Their first adventures.  The entire cast.  Missions on the ground, missions in space, diplomatic missions and science missions.  Players could team up or oppose one another.  They could interrupt one another’s turns with plot twists and events. 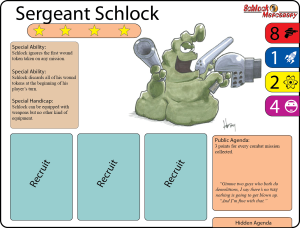 Sounds great, doesn’t it?  It wasn’t.

Every mechanism worked as it was intended.  And despite every effort, it was dull and mechanical.  The play time was too long.  Turns were anticlimactic.  I consulted with designers outside my regular group while my home playtest team helped me beat on it with a stick.  When Howard and I met at Gen Con 2010, he got the news.  This was not a game either of us wanted to attach our name to.

Get Knocked Down; Get Back Up

There is a lesson here for every aspiring designer. Sometimes, no matter how hard you work on a design, it simply will not come together.  It’s okay.  We all have those designs.  Believe in yourself and keep at it.

My wife Debra wisely asserts that any time you raise an issue you should also have a solution waiting to offer. It happened that there was a second prototype I’d been working on–TacDice–a skirmish-level minis game that was testing well.  TacDice was testing with superhero and Star Wars figurines while deliberately keeping the theme open-ended.  Schlock Mercenary needed a game.  TacDice needed a theme.  It was a match made in the proverbial.

Howard and I spent the next hour going over this game and discussing how it might be implemented as a Schlock Mercenary game.  Howard gave the okay and it was back to the workbench for Kevin…

One year later–Gen Con 2011–Howard and I met again, this time to play a game worthy of Schlock Mercenary.  Fast, intense play. Character-specific attributes and powers. Extra gadgets and weapons. Oodles and oodles of dice!  It was this play Howard relates in the KickStarter video.  He gave the go-ahead. Nich Vitek and Living Worlds Games became the publisher.  Since Howard was creating all-new original art for the game and Living Worlds Games was the publisher for 1955: The War of Espionage, there was no doubt this would be another great-looking game.

Three years of effort paid off.  Out of the ashes of a failed design came a great one.  Creating the game was hard but satisfying work. I hope that its story has given you insight into the process.
Would you like to know more about designing adaptations?  What’s your favorite adaptation? Why?  Share with your fellow readers in the comments below.  And if you’re enjoying what you’re reading, create and account with WordPress and follow this blog.  If you keep reading, I’ll keep writing.