Publishers occasionally ask my design group to be involved in late-game development.  This frequently includes evaluating the game’s graphic design.  Two of our team are color blind. This gives us something of an investment in game components being as clear as possible.  We have had several extensive conversations about the place of icons and text in game components.  As with many other aspects of game design, there is no one best choice.  Each has its merits, each has its limitations.

Today we focus on the merits and limitations of text. Friday will be all about icons.

This is particularly common in collectible games like Magic; the Gathering, Pokemon, and The X-Wing Miniatures Game.  It is also common in character-driven games like Arkham Horror or Schlock Mercenary: Capital Offensive.

The main advantage of putting text directly on a component is immediacy.  When all the relevant game effects of the card or character appear directly on it, there is significantly less need to consult the rulebook during play.  This keeps the game moving at a steady pace.  A steady pace enhances the flow of your game.  Enhancing the flow of your game increases player engagement.  Component text can be a good thing.

Another major advantage of component text is portability.  When I put a card from a trading card game into play, the card’s text proclaims its purpose.  There is little need to carry any rulebooks or reference sheets to clarify what the card does.  There may be fringe cases or card interactions that require a consulting the latest FAQ but otherwise the cards literally say everything there is to say.  Component text can be a very good thing. 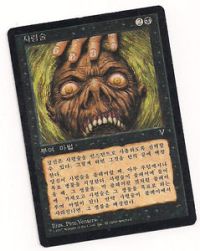 Text is not perfect, however.  It has its limitations as well.  Most prominently, game text makes your game components language dependent.  If you wish to publish a text-reliant game in multiple countries, you will have to manufacture a different edition for each nation’s language.  In the late 1990s and early 2000s, this was a perennial hurdle for German game enthusiasts.  Web-based translations of game text were a component all of us routinely added to the boxes.  Component text can problematic.

A big limitation of component text for the designer is surface area.  Sometimes, those words just won’t fit.  This issue hit us during the layout phase of Sentinel Tactics (Kickstarter campaign running now!).  We repeatedly found that we’d created abilities with too much text for the space available.  The text fit on our prototype cards because it used a different font and because prototype cards had no art.  Readying the game for publication meant hours rethinking details and shortening explanations.  Component text can indeed be problematic.

How about you?  How do you feel about text on game components?  If you’re a player, what do you prefer to see when you open the box?  If you’re a designer, what do you prefer to put in the box?  Share with your fellow readers in the comments below.  And if you’re enjoying what you’re reading, create and account with WordPress and follow this blog.  If you keep reading, I’ll keep writing.

Next time we get together, we will look at game component icons and how they compare with game text.  I would suggest that they tend to excel where game text fails but that the reverse is also unfortunately true.  Come back in four days and see if you agree!