Like the town cobbler whose children go barefoot, being a game designer often means that you don’t play any games.

Last weekend was a reprieve from this sorry condition, a little break from design and just play. Or so I thought. It seems that even when taken out of the workshop, the steady stream of analysis continues.

These are the new (to me) games I played and what I thought of their design.

Stefan Feld is known for introducing one pivotal element into each game and wrapping myriad scoring opportunities around it. AquaSphere obeys that format. In this case, the principal mechanism is ousting the previous player’s pawn when an area is selected. Your pawn goes in its place and the previous one goes to a holding area. Should too many pawns be in the holding area, some get returned to the owner’s play mat. And did I mention that getting pawns *off* your mat is one of the ways you score? This element gives AquaSphere a direct competitive element most eurogames lack. It will be interesting to see if other euro-style designers make this a trend. If so, we may see a revitalization of the style.

Is there anything Vlaada Chvatil can’t do? I mean really! He’s brought us a co-op game, a pattern game, a fantasy exploration game, and now a partnership word game. Had I not met the man personally, it might be reasonable to accuse him of being a team acting under a single nom-de-plume.

In any case, Codenames has all the elements needed to be a breakout mainstream hit. At heart Codenames is Password meets Hollywood Squares. You give a one-word clue and a number to your partner. Your partner tries to find the words associated with that clue with the number indicating how many fit the pattern. There are a couple of small wrinkles but that’s the main point.

Unless GenCon holds a major surprise in its aisles, Codenames will be this year’s pick for best game to play with nongamers. 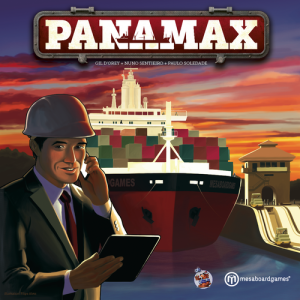 Being born in the Panama Canal Zone gave me a particular interest in all things Panamanian. Discovering that there was a meaty game about moving cargo through the canals made it a must-buy. And then it languished on my shelves. A few friends stepped up and walked me through my first play.

Panamax is essentially a rail game set in the canals. Each player has a company to manage but can buy stock in other players’ companies and thereby profit from their successes. I have believed for some time that the mechanisms of rail games needed to expand into other settings and this one is a solid example of that concept.

Frank Branham introduced me to this compact Japanese game. It is thematically a civilization game centered wholly around its tech tree. The tech tree is dealt out at the beginning of the game and each player gets a starting hand of resource/technologies. Managing those cards to acquire new resource/technology cards is the heart of the game. In my mind, this game is a super-streamlined version of Innovation. Clean and well-designed, this game played well with two players and Frank stated that three was the magic number.

Early in my play, I dubbed this “Civilization: the Euro” and that’s a pretty good summary. The game plays over four eras. Players may change leaders at the beginning of each era. During eras, players compete to take control of resources on the game map, to develop technologies, and to purchase wonders. These are all recognizably elements of a Civ game. But all these activities are in the pursuit of Victory Points and this makes the entire experience undeniably “Euro.”

Have you tried any of these games?  What were your thoughts of them?  Share with your fellow readers in the comments below.  And if you’re enjoying what you’re reading, create an account with WordPress and follow this blog.  If you keep reading, I’ll keep writing.