We have taken a look at several categories of trigger and effect, including several from our insightful readers.  We have also taken a look at four different combinations and suggested a game which might might best serve each.

For reference, here is our working list of triggers and events.  Let’s try four more combinations.

Here’s another combination that feels right for Duel.  Since battles can last over several plays, it would be interesting to create a card that grants cardplay each time it is damaged.  One of the deck concepts being developed for this game is “Gamers” and the idea of playing cards each time one of your cards is damaged certainly seems like a gamer-y kind of effect to me. 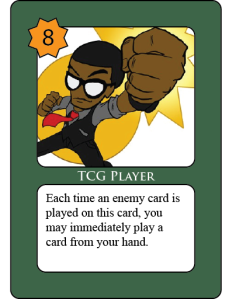 TCG Player is my attempt at such a combination.  Strength is fairly high in Duel–to date, there are only two cards in nine decks with Strength greater than 10–so this should ensure that its ability kicks off at about twice on the average.  Since this card’s ability is reactive, there’s also good incentive to play it face down to entrap your opponent rather than simply playing it for its Strength.

Taking a second look at the card, there’s a rising concern that this card is overpowered.  Playtest will confirm or refute this concern of course.  Should the card indeed be too powerful, there are multiple ways to address the issue.  The TCG Player could be weakened or it could be left strong while the other elements of the deck are weakened to counterbalance its power. 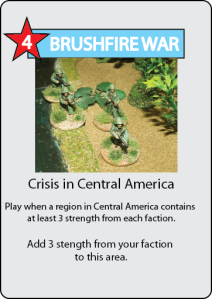 This combination evokes thoughts of a card-driven political tension game and Twilight Struggle by Ananda Gupta/Jason Matthews is one of the classics.

I confess that it’s been a few years since I’ve had the opportunity to enjoy this game but I believe a card of this type might look something like this Brushfire War.

This combination makes me think of a two player card-driven game about breaking out of prison. Perhaps it’s because we recently saw Guardians of the Galaxy and its delightful prison break sequence?  In any case, one player will play the guards while the other plays the inmates.

In an environment like this one, the Guard player’s deck would likely include a number of cards which counter Prisoner player’s cards or force the Prisoner to discard cards.  A classic trope of the prison break movie is the moment at which the prisoners subvert the Guards standard operating procedure, turning their plans against them.  In this spirit, we give the Prisoner deck this Right On Schedule card.

The idea for a theme is somewhat thin on this one but how about a worker placement/blind auction/deckbuilding hybrid in which the workers are cards?    In the majority of worker placement games, all workers are identical (Leonardo da Vinci and my own Zong Shi are exceptions) but if workers were cards, they could vary quite a bit.

Each player is given a small deck of mediocre starting workers and the like–Copper and Estates for you Dominion fans out there. The central gameboard features spaces from which actions, goods, better cards can be drafted in a worker placement manner.  Cards (workers) are played face down with a marker to indicate ownership.  More than one player can choose the same space.  Once all cards have been played for the round, each space resolves.  The player with the best worker gets the full effect of the space while everyone else gets a minor, lesser, effect. Ties would be broken in favor of the lower–and therefore first–card

One card players can acquire in this environment might be our Harbormaster shown here.

Continuing our back to school adventures, here’s another a nice homework assignment for you.  This time, I’m giving you the trigger, the event, AND the type of game this trigger must be used in.  See what you can think up and submit your ideas to our comment section.  Constraints breed creativity.  Go for it–you can do it!

Game Type: Pick Up and Deliver

In addition to back to school season, it’s also Gen Con season!  Luther, John and I will be in attendance, primarily at Greater Than Games–booth 1949.  We’ll be running demos of Sentinel Tactics all weekend.  Come by, say hello, and let’s play a game!

We have now looked at eight of my “when TRIGGER occurs, do EVENT” examples.  How did I do?  What combination did you find most interesting?  What made you like it so much?  Which one did you like least?  What keeps it from being more enjoyable?   Share with your fellow readers in the comments below.  And if you’re enjoying what you’re reading, create an account with WordPress (http://wordpress.com/) and follow this blog.  You keep reading. I’ll keep writing.