The Story So Far

Luther and I were recently approached to design a boardgame to enhance an existing RPG product line.  This project got me started thinking about cross-platform game design.

To engage players in your crossover, it must give players new experiences while staying true to the parent game.

Today, we take on the main traits of conversions between board games and minis games. There will be exceptions to every case I present but we are going to focus on the broad trends.

Converting a Board Game Into a Minis Game

Board games tend to be more abstract than their pewter and plastic counterparts.  Thus, when you make this type of conversion, plan to make the play experience more concrete.

Combat in the Sentinels of the Multiverse card game contains no information of location, no concept of maneuver apart from hand management.  Location is the foremost way in which the the board game made these super-powered battles more concrete.  Information of location let us highlight the kinds of details we don’t fret over in the card game.  Line of Sight could now become important, as could range.

Minis games tend to have more variability than board games.  Consider adding subsystems where the parent board game had fixed outcomes.

My high school gamer buddies loved adding subsystems to board games.  When we tried Battle Chess on our PCs, several of us were keen to bring that experience to the tabletop.  For those of you who may not be familiar with Battle Chess, its claim to fame was the animations it added.  Digital wizards and soldiers bashed one another across our 8×8 battlefield.  It preserved 100% of the rules of traditional chess, however.  In came our version.  We preserved all movement rules but also gave each unit its own combat ratings.  When a piece moved into an enemy space, a quick die roll determined who captured whom.  Because our delicate Kings could now defend themselves–however meekly–checkmate was removed in favor of a rule requiring capture.  A fixed outcome–piece entering the space captures the defending piece–was replaced with the variable outcome of a die roll.

Adding detail and variability comes with a price, of course.  They tend to add complexity and with complexity comes increased play time.  There are a couple of ways you can address this issue.  The first is to simply acknowledge that your game will take longer to play than the original, to tell your players that longer play time is part of the price of entry to a richer game experience.  Another way is to reduce the scope of your game.  Where the original board game might cover the globe, your minis game might focus on a single battle.

Converting a Minis Game Into a Board Game

So what about the inverse conversion?  Should play become more expansive, more abstract, and faster?  Yes. 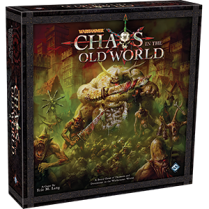 Warhammer is probably the best known miniatures battlefield game in the world.  Eric M. Lang’s  adaptation Warhammer: Chaos in the Old World abstracted individual battles, making Chaos closer to an area control game.  Play time remained close at two hours but the feel of the game is much more epic.  Lang also gives each player a checklist of objectives.  Satisfy these objectives to win the game; a nice way to round out this board game conversion.

Vlaada Chvátil’s sprawling Mage Knight Board Game takes the battle maps of the eponymous game out of the dungeon and into the wilderness.  Rather than controlling a team, each player controls a single hero who explores the map, defeats interesting monsters, and takes their stuff.  Combat is similarly condensed down; it has multiple phases but damage is streamlined and defeated enemies are immediately removed.

A Bit of Both: Board/Minis Hybrids

My friends and I were conceiving our version of Battle Chess in the late 1980s.  We did not know it at the time, but Jason B. McAllister and David A. Trampier had already taken our idea the rest of the way in the Fantasy Monster Slug-a-thon Titan.  Titan plays very much like a board game and minis game in one package.  Armies recruit units by travelling across the main map.  This part echoes resource gathering in your favorite eurogame.  When two armies encounter one another, they jump over to a tactical battle map.  You maneuver and sling dice on the battle map as you might in any other minis game.  If you’re interested studying in the strengths of each design type, Titan is a good place to start.

This crossover approach is not uncommon in the historical minis community.  Two players might be using the main map and rule set from We the People or Axis & Allies to govern global actions but disregarding the enclosed combat system in favor of a richer battle with their favorite minis ruleset.

Star Wars: The Queen’s Gambit is another interesting hybrid.  The battle on the Naboo Plains and the battle inside the castle are both wargames but Anakin’s flight and the Jedi battle are much closer to timers in a boardgame.  Supporting the boardgame side are the game cards.  Each one can be played two different ways.  Supporting the wargame side are the dice, or rather that buckets of ‘em players get to roll in the battles.

In the next column, we will tackle minis game/roleplaying games conversions.  Until then, keep on designing!

What do you think of boardgame: minis game conversions?  Did I miss any features?  Have you written any yourself?  How did you approach it?  Share with your fellow readers in the comments below.  And if you’re enjoying what you’re reading, create an account with WordPress and follow this blog.  If you keep reading, I’ll keep writing.