We have taken a look at several categories of trigger and effect, including several from our insightful readers.

We have put quite a few tools into our designer toolbox over the last two weeks.  Having tools is great.  Using them is better.  We need to try combining some triggers with events and take a look at which combinations best fit which games. 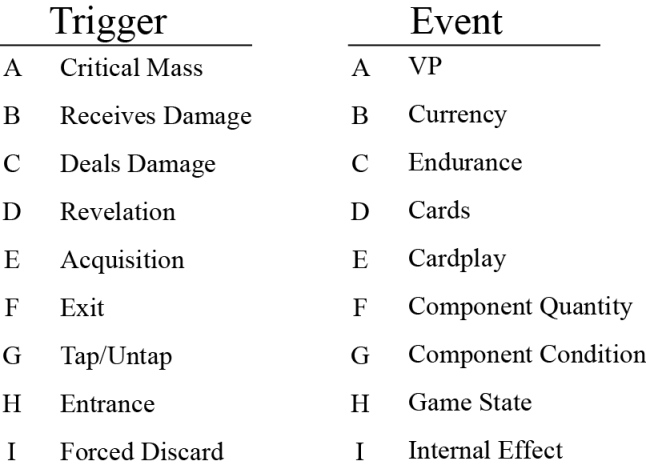 This list has nine categories of trigger and an equal number of event categories.  Multiplying those 81 combinations by the huge number of game categories out there and my mind became overwhelmed.  There were too many options pick a starting place.  Then I remembered A Whack on the Side of the Head and the power randomness can offer to driving creativity.  Rather than trying to take each combination on in turn, I elected to let ranom.org pick one from each column and discover what those combinations inspire.  Here we go…!

This combination evokes images of firefighters in me.  Starting from there, How might a game which includes a triggered effect like this one look…? 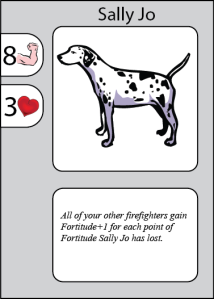 In towns of the American frontier era, volunteer fire departments competed for the honor of being the ones to put out the fire.  So extreme was their enthusiasm that this rivalry sometimes devolved into fisticuffs, even as the building burned down beside them.

For a game set in this era, players draft firefighters, then fight fires with their teams.  Firefighters are represented by cards which have two attributes–Bravery, Fortitude.

This a triggered event of this type in this setting suggests a character with low Bravery but high Fortitude.  Let’s make it our mascot–the classic dalmatian–and name her Sally Jo. 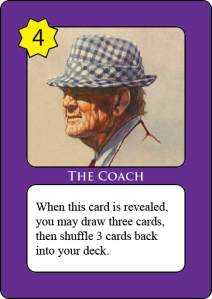 This is a combination quickly found its way into Duel. Playtesting has shown that in many decks, certain cards are better at some times than others.  This means that an important element of play is dealing with cards that arrive at better or worse times.  This is on its face not a major issue.  Card games like Magic: the Gathering, Sentinels of the Multiverse card game, and Cheat (Bullshit) all present exactly this challenge to players.

Since players may place cards face up or face down, revelation effects fit perfectly into Duel. I’ve been experimenting with quite a few of them. What if one of the Duel decks emphasized card combinations but also included a way to exert control over your hand?  One of the decks I’ve been developing has a Sport/Athletics theme and this sounds like a perfect job for a coach.

The Coach card was given low strength but I think his ability text is a solid match for a Revelation + Cards combination. 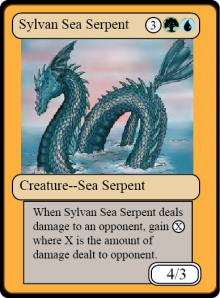 Many of the people in my design group play M:tG regularly.  It’s only natural then that discussions about its design should occur around the design table quite often.  Apart from the occasional draft match, I haven’t really played M:tG since the 1990s but looking at this combination immediately made me think of Mr. Garfield’s game.

Will generate currency–mana–green and blue seem like natural colors for the job.  Playing with a few combinations gave me the Sylvan Sea Serpent shown here.

Let’s try applying one to a pure eurogame–something which would easily sit alongside Princes of Florence on any gamer’s shelves.  Each player gets a play mat with a grid of squares.  Each player is working to fill his grid with buildings in order to achieve the best (highest scoring) town.

A number of resources appear each round according to the roll of four dice–one for each resource type.  The particulars of these dice is not terribly important to this exercise but let’s say that these are averaging dice which show 2-3-3-4-4-5 on their faces (eager shoppers can find them here). 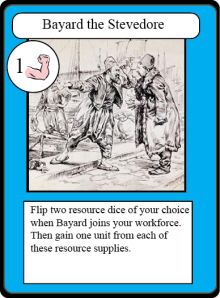 At the heart of the game will be card drafting/play mechanisms to navigate.  Cards collect resources, spend resources for build buildings and the like.  At the beginning of each round, a number of cards equal to the number of players is revealed from the deck.  These cards generally generate labor to construct buildings, make certain buildings cheaper to acquire or award endgame bonus points for building types.

Into this game, we bring Bayard the Stevedore.  He contributes little to your labor pool but offsets this with his particular ability to manipulate the resource supply.

August means back to school season and what better way to gear up than with a nice homework assignment?  Try this combination out for yourself.  See what you can think up and submit your ideas to our comment section.

These were my first four examples of the “when TRIGGER occurs, do EVENT” formula.  Next time, I will attempts to take on four more.  How will I do?  Come by Tuesday and find out!

What combination did you find most interesting?  What made you like it so much?  Which one did you like least?  What keeps it from being more enjoyable?   Share with your fellow readers in the comments below.  And if you’re enjoying what you’re reading, create an account with WordPress and follow this blog.  If you keep reading, I’ll keep writing.

Part one of this series identified six categories of trigger–Entrance, Tap/Untap, Exit, Acquisition, Revelation, and Damage to the Card.  I also pointed out that any of these effects could use the opponent as the trigger rather than the card holder.

I also challenged readers to identify any triggers I missed.

Several astute readers took on my challenge, identified missing triggers, and shared them in the comments section. 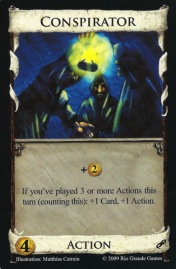 studio228 suggested critical mass effects of the form “if you have 6 or more cards in your graveyard…,” or “if you’ve played three or more actions this turn…,” or  “if either player deals 12 damage in a single turn…” 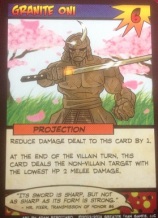 Carl also noticed that I’d completely omitted start/end of turn effects which is tragic when you consider how frequently such effects appear in the Sentinels of the Multiverse card game.  Reflecting on such effects, I might still leave them off the list however.  So many games which include start/end of turn that phases are commonly reserved for just this purpose whereas what I was hoping to address in this series are effects which are not so evident.  Of course, I did include tap/untap so maybe start/end of turn should be these as well.  there’s certainly something there to think about…

Triggered card effects fit under the “when TRIGGER occurs, do EVENT” umbrella.  Having taken a revised look at the variety of triggers that exist, we now begin a take on the other half–effects.

Many games keep score with victory points of one kind or another.  The simplest and most obvious effects then would say things like

If your game has an economic element in which items must be bought or sole, currency is another obvious effect.  Overt currency effects tend to say things like

“…you have 5 extra silvers this turn.”

“…each opponent must give you 1 coin.”

“…all your Shekels count double this turn.” 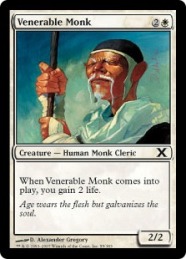 Most Constructed Deck Games (CDGs) are dedicated to survival.  Players of these games generally think highly of any mechanism which extend life.  Because some CDGs use the deck itself as a measure of life while others track life separately and the daddy of them all M:tG does both, these effects may be overt or covert and say things like

“…shuffle your discard pile into your deck.” 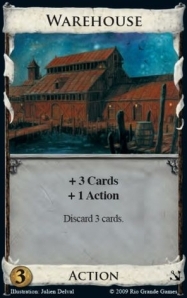 For many card games, the cards are a currency in and of themselves.  Gaining or losing cards can then be quite important.  Effects of this type might read like

“…all opponents must discard a card.”

“…all opponents must discard the top card of their deck.”

“…draw a card at random from each opponent’s hand and add it to your own.”

These are the first five card effect categories in our look at the “when TRIGGER occurs, do EVENT” formula.  Next time, we go after the rest.  See you Monday!

What effects did I leave out?  If so, what were they?  What game triggers do you find most interesting?  What made you like it so much?  What game triggers do you dislike?  What keeps it from being more enjoyable?   Share with your fellow readers in the comments below.  And if you’re enjoying what you’re reading, create an account with WordPress and follow this blog.  You keep reading. I’ll keep writing.